Liposuction, also known as suction-assisted lipectomy, or fat suction, is a procedure used to improve the body’s contour. By removing fat deposits that lie between the skin and muscle, fat cells are removed from the directed area, resulting in a thinner, more sculpted physique. 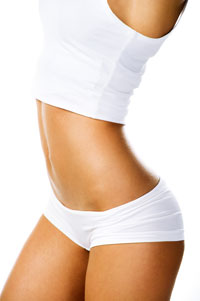 Candidates for liposuction at Atlanta Plastic Surgery include men and women who are in good physical and mental health, yet have areas of excess, stubborn fat that is resisting the efforts of diet and exercise. Having firm and elastic skin will result in a better final contour and enhanced look. However, it is important to note that liposuction is not a substitute for weight reduction. Liposuction is intended to remove excess fat in “problem areas” and must be supplemented by a healthy diet and exercise plan in order to maintain results.

The most frequently treated liposuction areas in women are the chin, abdomen, thighs, hips, knees, arms, buttocks, calves and ankles. Men typically have liposuction performed on the neck, chin, abdomen, “love handles“. Although there are various liposuction techniques, the basic liposuction procedure (tumescent liposuction) involves making small incisions to insert a small hollow tube, called a cannula. Fluid is added into the problem areas to reduce bleeding and pain and excess fat is then removed through the tube until a pleasing improvement is made.

Careful attention must be paid during liposuction to ensure that blood and fluid loss is minimized without increasing the risk of swelling and bruising; therefore, patients should ensure their plastic surgeon is very familiar with the procedure and the composition of the tumescent fluid it requires. Several areas may be suctioned during one procedure, as long as the patient’s cosmetic need warrant it and the aforementioned factors (bleeding, swelling, etc.) are taken into account. Liposuction, or targeted suctioning, is often combined with other procedures such as breast surgery and abdominoplasty and may be used during a facelift to contour the neck and chin (liposuction of the double chin).

Your liposuction consultation can be scheduled at our Atlanta, Alpharetta, and Sandy Springs / Buckhead Locations.

Atlanta Plastic Surgery, P.C.’s surgeons have been performing Atlanta liposuction cosmetic surgery for over 40 years. Since the procedure’s inception there have been multiple plastic surgery technology developments and liposuction alternative options introduced to simplify the fat reduction process, minimize procedure recovery time, and limit the invasiveness of the procedure. The following is a general overview of body contouring procedure types. Atlanta Plastic Surgery’s plastic and reconstructive surgeons remind their patients that only a proper cosmetic surgery consultation can determine which body contouring type is best suited to your cosmetic needs.

Known as the Body Jet liposuction system, a stream of sterile water and tumescent fluid is used to loosen the undesired fat. Unique to this liposuction type is the “closed system” design that withdraws the fat and excess fluid for separation and later use in fat transfer procedures for breast augmentation or buttock enhancement (Brazilian Butt Lift).

A vibrating component on the end of the liposuction cannula works with the injected tumescent fluid to further loosen the targeted fat and facilitate the fat removal process.

Ultrasonic energy (sound waves) is used to loosen the fat for removal. Unlike laser assisted liposuction, UAL uses externally applied energy and is therefore a fitting procedure for areas that require the utmost precision.

Can liposuction help me to lose weight?
Although many people unfortunately believe otherwise, liposuction is actually not recommended for patients who simply need to lose weight.  It is specifically designed to remove excess fat cells only from certain discreet areas of concern, effectively sculpting and shaping the body’s contours.  Although there are several different types of liposuction that can safely remove fat from areas that are resistant to traditional diet and exercise efforts, in most cases it is considered unsafe to remove more than a few pounds of fat during a liposuction procedure – certainly not enough to make a sizable difference in the overall weight of the patient.  Optimal candidates for liposuction include those who are close to, or have already reached, their ideal weight but who have small, specific areas of concern that require additional refinement.

Does liposuction only work on the midsection?
Absolutely not, liposuction can be used to safely remove stubborn fat from many different areas of the body.  While the abdomen, the hips, and the thighs may be the most popular treatment areas, they are most certainly not the only options available.  Liposuction can be used to remove small amounts of fatty tissue from the arms or even from the breasts and nearby areas of the chest and back, allowing women or even men to achieve a more slender and sculpted physique without the need for full breast reduction or gynecomastia surgery.  Liposuction can also be used during facial plastic surgery to help slim the jawline, chin, and upper neck, refining procedures like a full facelift or neck lift.  Virtually any spot where fat cells tend to accumulate can be addressed with liposuction.

What is the difference between liposuction and a tummy tuck?
Both of these procedures may be used to slim and tone the abdomen and midsection, but they achieve this result in very different ways.  Although liposuction does remove excess fat, it does nothing to smooth the excess, sagging skin that may be left behind.  A full tummy tuck, or abdominoplasty, procedure not only removes sagging skin, but also re-tightens underlying abdominal muscles that may have been stretched and distorted by long term obesity or pregnancy.  This aspect is fundamental to removing the “pooch” that can affect the lower abdominal region.  It is often most effective to combine both procedures into a single surgical session, as is frequently done during the extremely popular mommy makeover procedure.

The following doctors perform Liposuction at Atlanta Plastic Surgery. Click on a doctor to learn more about their practice and to view Before & After plastic surgery photographs.